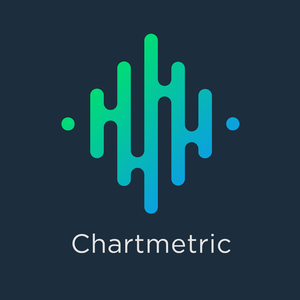 Chartmetric was founded in 2016 and emerged from beta in 2017. Its clients including all three major record companies, thousands independent labels, publishers and distributors, as well artist managers, agents, festivals, promoters and brands from outside of the traditional music industry.

But most importantly … the vast majority of Chartmetric ...

users are artists - artists at every stage in a career, covering every genre and hailing from over 100 countries. Chartmetric provides insight that every unsigned, emerging artist needs - insight that helps them to navigate the complex global market for music, finding and engaging audiences at a truly global level.

Chartmetric ingests vast quantities of data from numerous sources covering digital services, socials and traditional media. It provides users with not just a single authoritative point of reference, but also an illuminative and ever-evolving source of astonishing insight.

By deeply integrating data for millions of artists and tracks, Chartmetric helps its clients gain an incredible level of understanding about the complex global-social market for music. Chartmetric provides clarity for every aspect of A&R and marketing, powered by advanced machine learning and data science.

Music Industry data used to look inwards and backwards, allowing artists and stakeholders to only see what they did yesterday. However, Chartmetric allows them to see the entire global marketplace, looking beyond the obvious, constantly seeking new opportunities to engage audiences or discover new talent.

Sung Cho has fifteen years of industry experience in mobile game development and data analytics. Before founding Chartmetric, he was product manager of Sales Cloud applications at Oracle. He strongly believes that data can solve challenging problems and improve our understanding of people and their behaviors. Sung received his MBA from UCLA Anderson, while enjoying the breeze of Santa Monica and the view of the Pacific beach.

Chaz is a chief commercial officer at Chartmetric and helps with strategy, marketing and client relationships. He also advises major and independent labels, as well as managers and publishers, on streaming, helping them create new ways to grow audiences for artists globally. In the past, he held senior positions in major record companies and founded Grammy Award-winning indie labels, as well as working in the live music sector and nightclubs. Chaz lectures internationally in universities and speaks regularly at conferences including Google Zeitgeist on the future of the music industry.

The last six months have been unprecedented in the modern music industry, yet artists and fans have adapted and continued to create music and connections.This energy resonates in the latest report from Chartmetric, which takes a deep data dive into where and how new acts are emerging and how older tracks--be they from 1988 or 2018--are finding new life on popular platforms.

“Even with the disruption of lockdowns and quarantine, many of the trends we’ve noticed for quite some time remain in force and even intensified with the sudden change in lifestyles around the world,” explains Sung Cho, Chartmetric CEO. “Fans are finding tracks that are fun to make short videos to, or they are discovering new favorite songs thanks to popular shows on streaming services like Netflix. They are less concerned where the artist comes from, what their specific style is, what language they speak, or how old the track may be. They just hear something in it that clicks, and the song becomes a hit.”

Newer platforms like TikTok and tried-and-true breakthroughs via sync exerted vital influence on what tracks caught listeners’ attention. Chartmetric saw a lively mix of older, catalog tracks garnering fresh excitement, whether we’re talking MC Hammer or Anne-Marie, along with newcomers surfacing on TikTok like BENEE (the rising star behind “Supalonely”). Tracks that gain viral following on one platform often get a significant boost across the digital board. Pop and hip hop remain strong, and remixes, features, and other flavors of collaboration are setting the tone for music in 2020.

Below are some key takeaways from the report, covering the period from Jan. 1 to June 30, and released publicly on Aug. 31, 2020. You can find the full report, complete with interactive graphics and data breakdowns for prominent artists and tracks, here.

For Trending TikTok videos, collaboration and multi-artist tracks are the rule, not the exception, with seven out of the Top 10 tracks at the end of June having multiple artists featured on the same track.

For many tracks, this takes the form of remixes, which are immensely popular on TikTok and can give catalog tracks (released 18+ months ago) a second wind, as is the case for Shaun Reynolds’ remix of Anne-Marie’s 2018 track “2002"; Puri, Jhorrmountain, and Adje’s 2017 track “Coño,” which has a whole host of remixes now; and Nfasis’ 2017 track “Tra Tra,” which spawned a number of remixes and led to the #AhiChallenge on TikTok.

TikTok virality continues to help artists grab success on other platforms, with Powfu/beabadoobee, BENEE, and Jack Harlow being particular artists of note. After having viral TikTok tracks, these artists saw Top 10 growth on Spotify, Instagram, YouTube, and/or Shazam. Many of the tracks with the most Shazam growth have had TikTok success as well. It could be purely correlational, but it also supports current industry thinking that TikTok is driving music discovery. Even if artists haven’t figured out how to grow their own TikTok-native audiences, the platform is clearly an effective auxiliary tool for growing audiences on other platforms.

“TikTok might be the new viral marketing platform for music right now, but it’s still largely artist agnostic. User interactions with particular tracks — or even just one particular lyric from a track — continue to be the dominant form of TikTok use. For now, artists seem to benefit most from track-level marketing on TikTok while building their brands and engaging with their audiences elsewhere,” says Chartmetric Digital Strategy Lead Rutger Rosenborg.

A potentially powerful discovery tool, TikTok is also a vibrantly global one. America still dominates under most circumstances, however: United States artists accounted for more than 60 percent of the tracks on the Trending TikTok Tracks chart for the period (not taking into account levels of consumption). Indian artists' tracks comprised 4.28 percent of the tracks — or the 4th most — on the TikTok chart for this reporting period, indicating the growing importance of TikTok for Indian artists over the course of 2020 before the government banned the app at the end of June.

“Imagine the implications for American artists if the upcoming negotiations with Bytedance were to fall through and TikTok actually was banned here,” notes Rosenborg.

Lockdowns did impact American tracks on TikTok, however. There was a significant dip in Top TikTok Tracks from American artists in March, lining up with Chartmetric’s April analysis of COVID-19’s effect on Spotify and YouTube. In other words, tracks from American artists were added to videos less during the height of coronavirus quarantines in mid- to late-March, a time when many artists paused their release plans. Though Pop and Hip-Hop took a hit as a result, they were still by far the most popular genres on this TikTok chart during this time period.

Chartmetric tracks various broadcast and OTT/SVOD syncs, and two intriguing cases of sync making a song go viral stood out in this half year of binge watching.

Sync can lift an older song to new heights. Indie Pop artist Ashe released her song “Moral of the Story” on Valentine’s Day in 2019. Around the same time this year, the song got a second wind after appearing on the Netflix movie To All the Boys: P.S. I Still Love You, which nearly doubled the track's Spotify Popularity and brought it to No. 3 on Chartmetric’s list of tracks with the most growth in Shazams. People who watched the movie were likely Shazam-ing the track en masse. This engagement increased Ashe's daily Spotify followers 10x and daily Instagram followers 100x, arguably catapulting her to a new level in her career.

“Despite their potential for growth, SVOD syncs are obviously a rare opportunity for most artists, but it’s just one way to be involved in passive audiovisual storytelling,” says Chartmetric’s Content & Insights Manager Jason Joven. “So being open to lending your music to anyone telling their own stories--whether through backing a TikTok influencer’s video, streaming across a gamer’s Twitch livestream, or nabbing a Netflix sync--seems to be the real opportunity for growth in 2020.”

Synced songs can cross cultures and hit new fans in the feels. Netflix's Korean drama hit Crash Landing on You featured Yerin Baek’s "Here I Am Again" and Yoon Mi Rae’s "Flower." Both trended on Shazam more than any other of the drama’s soundtrack songs, and were probably most memorable to Western viewers as their English refrains were heard during some of the more emotional moments in the series. This meant good things for the artists: Yerin Baek saw a nearly 200K increase in her Instagram followers that coincided with the show's premiere worldwide on Dec. 14, 2019.

While the rest of the most viral artists in H1 2020 relied on playlist adds to make their mark, 20-year-old Lo-Fi rapper Anthony Tubbs, aka Rxseboy, built a steady increase across all streaming and social media platforms, possibly thanks to his constant flow of features and releases. Known for collaborating with Canadian lo-fi act Powfu, Rxseboy’s fanbase really started to grow following his May 11 single “ill come back to you,” featuring Powfu and fellow Emo rapper Sarcastic Sounds. His current leap in Chartmetric’s overall popularity ranking system (Cross-Platform Performance) will not likely wane during the rest of 2020.

Though some analysts noted lockdown bumps in more “nostalgic” genres, including classic rock and country, on streaming services, Chartmetric’s data argue that hip hop, electronic, and pop artists still reigned during the first half of 2020. Rock artists are virtually non-existent in terms of top growth percentages across the platforms Chartmetric analyzed for this report. Pop, Hip-Hop, and EDM-oriented artists seemed to have the most representation, with DJs performing particularly well on Shazam.

Chartmetric was founded in 2016. Its clients include all three major record companies, thousands of independent labels, publishers and distributors, as well as artist managers, agents, festivals, promoters and brands from outside of the traditional music industry. Chartmetric ingests vast quantities of data (from nearly 2.4M artists worldwide) from numerous sources, covering digital services, socials and traditional media. It provides users with an illuminative and ever-evolving source of astonishing insight. By deeply integrating data for millions of artists and tracks, Chartmetric helps its clients gain understanding about the complex global-social market for music. Chartmetric provides clarity for every aspect of A&R and marketing, powered by advanced machine learning and data science